Entering Agra district, we first visited Sikandara, the mausoleum of Emperor Akbar. The mausoleum was a beautiful red sandstone structure in the middle of a well-maintained lawn, which had deers roaming around the park. Emperor Akbar had started the building of his own mausoleum but it was completed by his son, Jahangir, after his death. We walked into the tomb, after removing our shoes at the entrance. It was a dark passage and we followed some other tourists going inside. The passage became darker and darker as we went further inside and we were a bit uncomfortable. We reached the inner tomb and it was pitch-dark. As we turned to leave, a loud voice within the tomb cried out ‘Allahu Akbar’. Though I reasoned out that there must be a recorded voice activated by someone stepping over some particular stone or touching a wall, the unearthly voice did startle us for a moment.

Leaving the tomb, we walked around the premises. Emperor Akbar was renowned for his generosity and his fair-minded principles. Perhaps because of that or not, there was an atmosphere of calm and peace in the place.

After checking in at our hotel, the local guide arranged by our tour operator arrived to take us to Agra Fort. Started by Emperor Akbar, the construction of the fort was completed by his grandson Shah Jahan. We walked through a doorway into the courtyard, where the Emperor used to hear the public’s grievances.

We walked inside and entered the royal apartments, where according to our guide, nearly 5000 women had once resided in tiny cramped rooms. Though the living quarters were tiny, they opened onto a nice courtyard with a fountain in the middle. The courtyard had been used for growing grapes for wine. And, the dancers performed in front of the fountain, while Shah Jahan watched from his rooms at one end. Shah Jahan’s rooms had a lovely view of River Yamuna and the Taj Mahal. 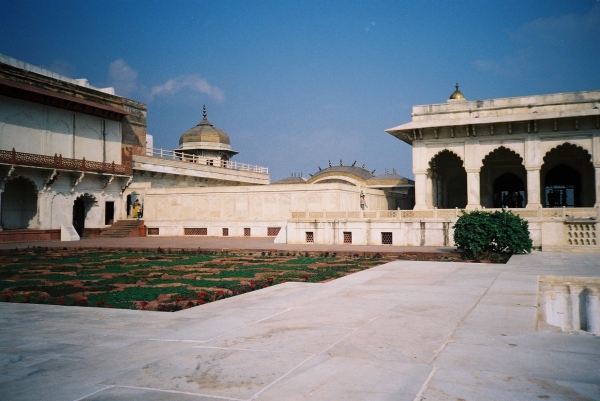 It was also in these rooms that he had been placed under house arrest by his son Aurangzeb, during the last eight years of his life. As his health was failing, he had been cared for by his eldest and favourite daughter, Jahanara. On either side of his rooms were the identical apartments of his eldest and youngest daughters and the guide pointed out that Jahanara’s apartment had been built in marble, which was her parents’ favourite choice of building material. After her father’s death, Jahanara moved to Delhi and is credited with the design of Chandni Chowk, one of the oldest markets in Old Delhi. 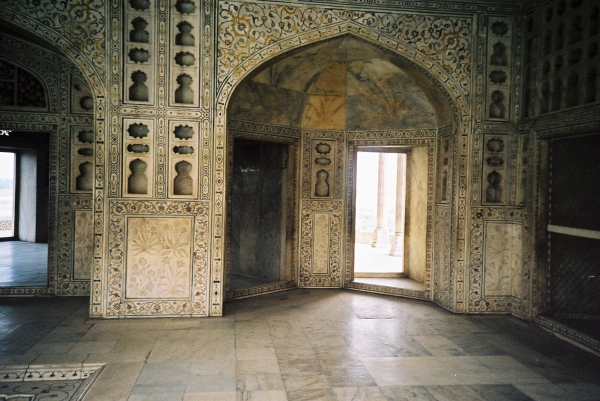 We walked into the next section of the fort, which is one of the earliest surviving buildings from Emperor Akbar’s time and was the zenana for his wives. It is called Jahangir Mahal perhaps because Akbar’s son, Jahangir, also chose it as his residence without building a new set of apartments as his son, Shah Jahan, did later. Jahangir Mahal was built in red sandstone, the material of choice of Emperor Akbar. The royal apartments opened onto a courtyard with a pool in the middle. There were two sets of identical apartments on either side. One side had windows, while the other didn’t. They were supposed to be the summer and winter palaces respectively. For such a huge fort, it was amazing that the living quarters were so cramped.

After our visit to Agra Fort, we drove to the Taj Mahal. As the Taj Mahal was a considerable distance away from the parking area, the guide arranged for a horse-cart/ tonga to take us closer. My mother especially enjoyed this tonga ride and it seems to be her favourite memory of our visit to Agra.

Passing the security gates, we entered the Taj through the Eastern Gate into a courtyard where the four gates faced each other. Each entrance was for a specific purpose in the old days, one for the Emperor and royal dignitaries, the other for public etc.

As I approached the Northern Gate, my anticipation of a treat increased but our way was blocked by men with photo albums trying to get us to buy a photo package with them. With difficulty, we extracted ourselves and entered the gate feeling harassed. And, there we were at the famous spot where the Taj has been photographed a countless times and I had expected it to be the best highlight of our trip. It was an underwhelming moment as the crowds were quite distracting.

As we walked closer to the lovely marble structure, I started seeing the beauty of it. The longer you looked at some face of Taj Mahal, the more appealing you were going to find it. Unfortunately, the rain clouds started gathering above and it was very windy.

We hurried into the tomb, after wearing our shoe covers, so that we would escape the rains. Following a long queue, we walked inside the tomb which was quite dark. The guide pointed out the difference in designs of the resting places of Arjumand Banu Begum and Shah Jahan. We came out of the tomb and walked along its outer perimeter and came to the face overlooking river Yamuna. The guide pointed out the ruins of the foundations that had been laid by Shah Jahan, for his own mausoleum – the Black Taj, across the river. He had intended that his mausoleum face that of his wife’s in perfect symmetry down to the fountains. However, his son Aurangzeb refused to build it for him and instead buried him alongside his wife. While this act is considered somewhat dishonorable of his son, I think it is perfect that the couple celebrated for their love for each other be buried next to each other. We sat for a few minutes resting on the steps and then decided to turn back. The rain started pouring so we rushed back to our car.

I think I would have loved my experience of Taj Mahal more, had I visited it earlier in the day before it became crowded as we had done with Sikandara.

Is Taj Mahal on your travel wish list? If you have visited it, what was your experience of the Taj?

[I am linking this post to Faraway Files #5, Wanderful Wednesday and Weekend Travel Inspiration]