During my student year in the UK, I had the opportunity to enroll for the Host UK programme. Since I was planning to visit Scotland during the summer, I decided to combine part of it with a stay with a local family and applied for it.  I was paired up with a family in Inverness. A lovely couple who had a long history of hosting foreign students and who actually agreed to host me in the last minute, when my original host in Inverness had fallen sick and they had been contacted on the day I was traveling to Inverness, as Host UK did not want to cancel out on me.

Based on my experience, I would highly recommend any foreign student in the UK to include a Host UK homestay experience as it does enrich your student experience and probably, the friendship that you build lasts beyond your student year.

The special six memories of my homestay experience in Inverness are the following:

(1) Getting to know Helena and David and their lovely neighbourhood:

Helena, with whom I spent the most time, was a retired teacher and an avid historian, loved to cook and was very proud of her garden. I enjoyed accompanying her on her walks around the woods in the neighbourhood, overlooking Loch Ness, short forays into her garden prior to cooking to get some garden produce. I remember planning and cooking a Sri Lankan dinner (they called it tea) once and wondering if her nieces who were not exposed to other cuisines would like it. Her interest in Sri Lankan history and culture and enthusiasm in sharing the Scottish stories was what I remember most about my stay with them.

Helena said that I needed to visit Culloden Moor, as it was a place that meant a lot to Scottish people. The site of the 18th century battle was originally not something that I thought I wanted to visit as I have never wanted to visit former battlefields. However, seeing her keenness, I agreed to it. We set out the next morning after my arrival in Inverness, and went to the site. There is a little museum at the site. For me, it is one of the best museums I have seen to-date as it shows the perspectives of all stakeholders (civilians and officials) on both sides pieced together from their letters and journals. I understand there are other museums that have done this as well but this is the first that I have been to.

The museum then opens out into an open expanse, which you can walk about with an audio guide which talks about different points – such as the points that leaders of various Scottish clans fell.

The little cottage, which had been the makeshift hospital and neutral ground, evoked a sense of sadness before I learnt that even though the wounded soldiers made their way there to surrender, they had been killed.

Culloden Moor, a place that Scotland has decided to preserve as part of their heritage and learning, is a place that does raise a lot of questions on the purpose of battles and loss of lives and why human beings are unable to resolve power issues through other means.

Helena having taken me to her favourite place in the morning, David decided to take me to his favourite place that afternoon having learnt that I loved dolphins. We went in time for the low tide as apparently the Moray Firth bottle nose dolphins turned up soon after.

There were a few families that had turned up to watch out for the dolphins but though we waited till sunset, we didn’t see any that day.

On the drive back from Canonry Point, we passed an area where there were trees with what looked like rags tied to them. It reminded me of the prayer cloths tied at trees outside Hindu and Buddhist temples. David stopped the car and we went to some of the closest trees. In pre-Christian times, it was believed that a healing spirit inhabited the well and people came to heal themselves with the water from the well and tie rags of cloth to the tree to make a wish of healing. Since Christian times, a Christian saint has replaced the nature spirit in the folk stories but the belief remains the same. And people continue to tie pieces of cloth rags to the trees. 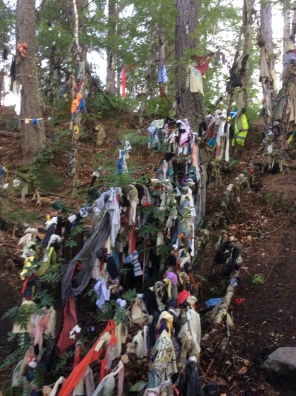 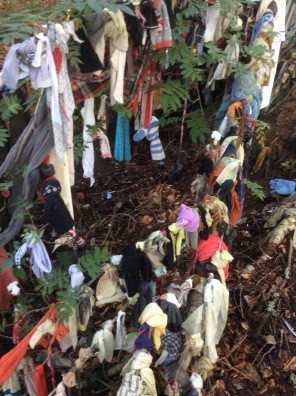 The next day, Helena decided on a day out with a picnic to a couple of her favourite places. We first went to Corrimony Cairn. This is a burial chamber from 4000 years ago.

It is a collective tomb that was built and the passages have an astronomical alignment and orientation.

Being a hiker and nature enthusiast, Helena took me to Plodda falls next. This is the highest falls in the area. We discussed the various trails and knowing my mobility issue, she chose the shortest trail that would allow me to see the falls with the least walking effort. It still wasn’t a short or easy walk though. 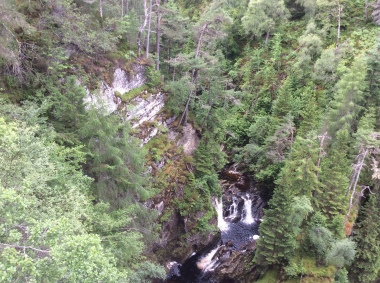 Returning back to the car park after we went on this short trail, we stopped by a stream and relaxed for a while simply chatting and taking in the fresh air of the forest.

It’s been years since this visit but we still keep in touch. I was happy to hear of the birth of their grandchildren in the years that have followed – one of whom actually shares my birthday, so I am not going to forget him.

I am not sure if I would have especially visited Inverness had it not been for Host UK, as I had other Scottish cities and islands on my priority list. I am also very sure that I would not have visited any of the above mentioned places had it not been for my host family actually taking me to the places that they loved and letting me experience them as well.

So I hope the above is of some help to those planning a visit to Scotland in helping plan a travel to Inverness.