I opted out of visiting Saqara on the group tour, as I had already visited it on my first free day on my own. Instead I decided to take an Uber ride to Coptic Cairo. These are the six places I visited within the cordoned off area.

The Church of Saints Sergius and Bacchus or the Abu Serga is dedicated to the soldier saints martyred in the 4th century. The church is believed to have been built over the crypt where Mary, Joseph and Infant Jesus are said to have rested during the flight into Egypt when fleeing from Herod.

Built around the 7th century, the Church’s location above the gatehouse of Babylon fortress gave the church it’s name.

Located within the Babylon Fortress of Coptic Cairo, this church was rebuilt in early 20th century after a fire destroyed the original structure from the 10th century.

Dating back to the 5th or 6th century, St Barbara’s Church is one of the oldest buildings in Coptic Cairo. It is close to Ben Ezra Synagogue. 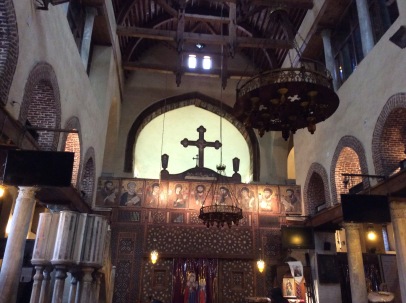 The current structure dates to the late 19th century but its predecessors are said to have dated back to the 9th century. Local folklore also considers this the site where Baby Moses was found among the reeds.

Built in the early 20th century, the Museum has a large collection of artefacts from Coptic antiquities.

Coptic Cairo is definitely an area that needs to be visited, after one has visited Giza governorate and the Pyramid complexes of Giza, Saqqara and Dahshur.