It was a photo tour of Lacock abbey, by Clare at Suitcases and Sandcastles, that inspired me to add the abbey to the list of places I planned to visit during my trip to England last year. 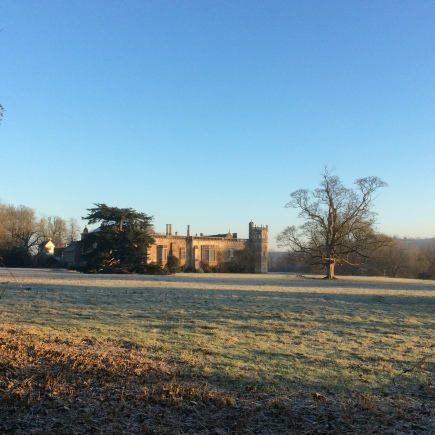 Lacock abbey has a very fascinating history. Ela, the Countess of Salisbury, was a wealthy heiress who became the countess suo jure or in her own right, and not by marriage, in 1196. She did marry that same year, at the age of 9, and her husband became the Earl of Salisbury by marriage. A few years after her husband’s death, Ela founded Lacock Abbey in 1229 and laid its first stone in 1232. She joined the abbey as a nun in 1238 and became its first Abbess in 1242. To ensure that the village around the abbey thrived, she obtained a charter from the King which allowed a weekly market to be held in Lacock. 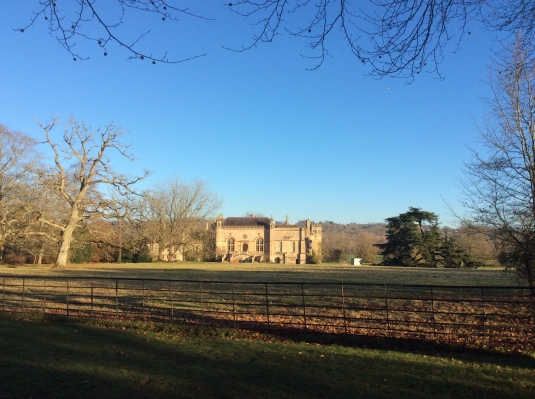 During the dissolution of the monasteries, Sir William Sharington bought the abbey and converted it into a house in the mid 16th century. Despite the demolition and construction work that took place, the cloisters remained as it was in Ela’s time. The Abbey soon passed into the Talbot family, when Sharington’s niece, to whom the property was willed, married John Talbot. In the mid 18th century, the house underwent alterations in the Gothic revival style. 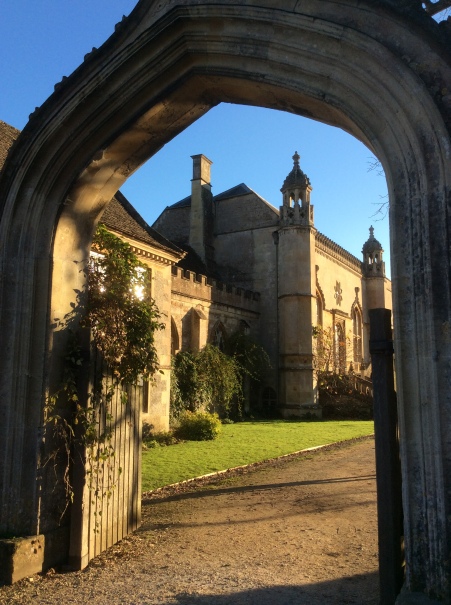 The abbey was gifted to the National Trust in 1944 by Matilda Gilchrist-Clark, who inherited it from her uncle Henry Talbot, the son of William Henry Fox Talbot, who contributed to the history of photography by developing the photographic negative process. A museum on photography is housed at the barn at the abbey gates and you can see the copy of the world’s first negative taken by Talbot in 1835 here. The negative is of a window at Lacock Abbey. 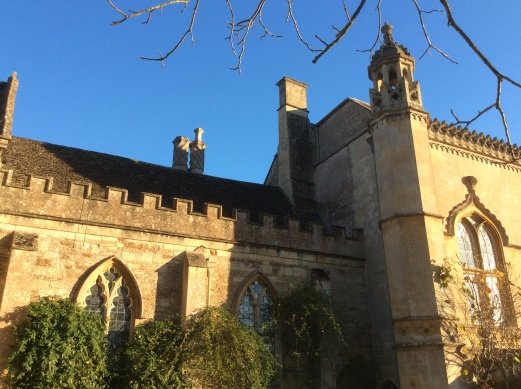 My visit to the Abbey was in winter and so only the cloisters and the grounds was open to visitors, and not the house. However, as my primary fascination about the place was centered around its medieval history, it worked out well for me. 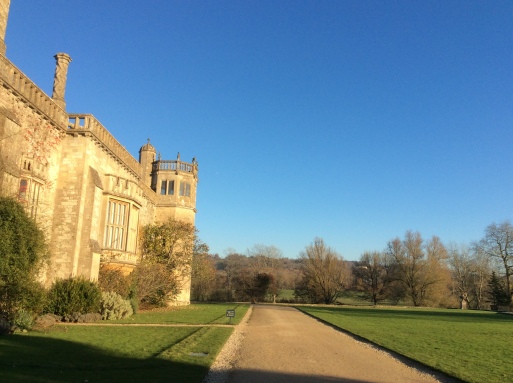 The entrance to the cloisters was adorned with Christmas decorations and the staff were at work decorating the passageways, as I explored it. 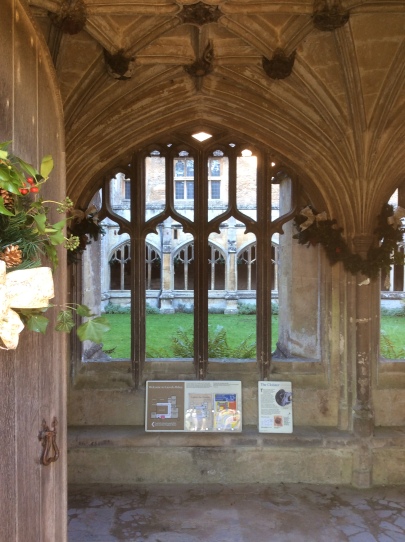 The Chapter House is a section of the cloisters, which has been well preserved. This room was where the nuns gathered every day and read a chapter from the Rule of St. Benedict for Benedictines and Cistercians. 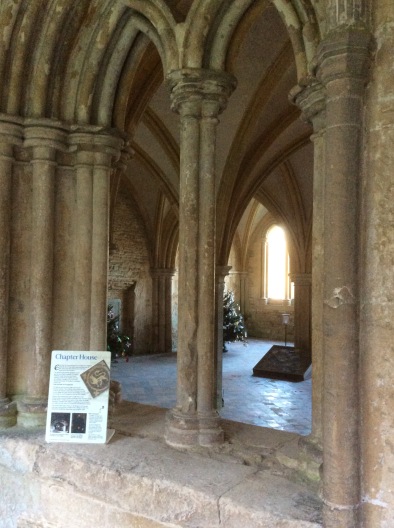 If not for Septimus, the kid’s guide to the cloisters, urging one to watch out for the creatures that came alive at night, I might have missed out a closer look of the ceiling bosses. I spotted the swan but not the seahorse or the mermaid. It would have been fun had the adult’s guide also included ‘spot the object’ games. 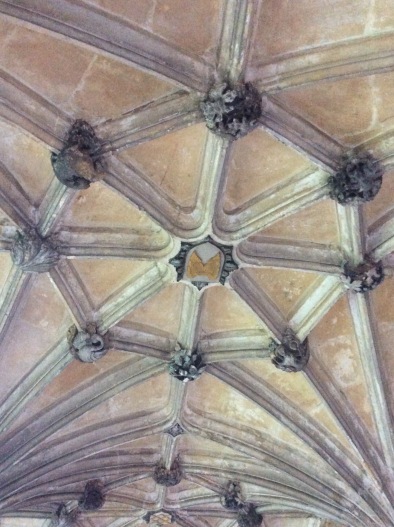 The niche in the wall, which once held books, was also interesting. Since books were very expensive during the Middle ages, they were often locked or chained to the shelves. 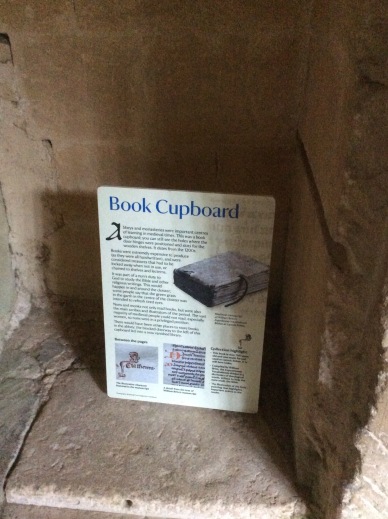 The warming house was one of two places at the abbey, which had a fireplace. Visitors were therefore shown to this room, after being received in the parlour. The nuns’ dormitory was above this room so that the warmth from the room would reach them. The huge cauldron, dated 1500, was originally a cooking cauldron before becoming a garden ornament in the 18th century. 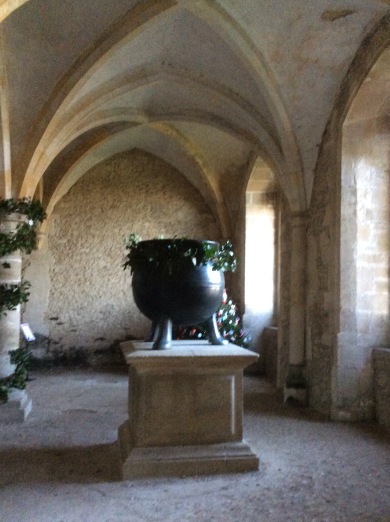 With the quiet surrounding the cloisters, it was very easy to imagine how it must have been like during the time that the nuns were in residence at the abbey. 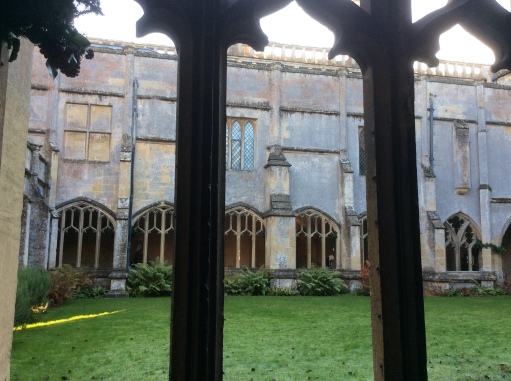 Emerging from the cloisters, I decided to walk around the abbey grounds, circling the abbey. The grounds were well maintained and a beautiful place to walk around. 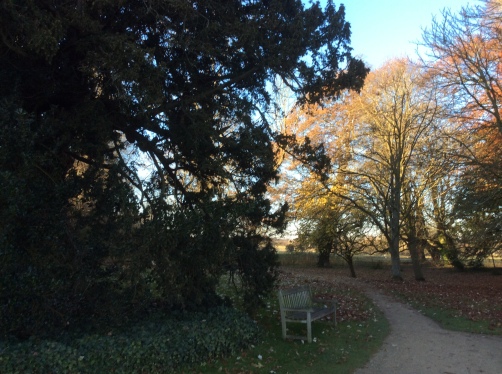 I passed a deep and still pool, as I walked along the grounds carpeted with the fallen leaves. 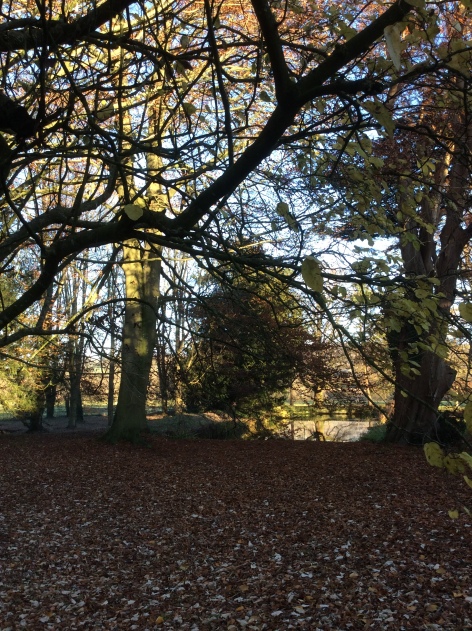 The Rockworks was a mid 18th century creation, built as a mock ruin for those walking the grounds to come upon. 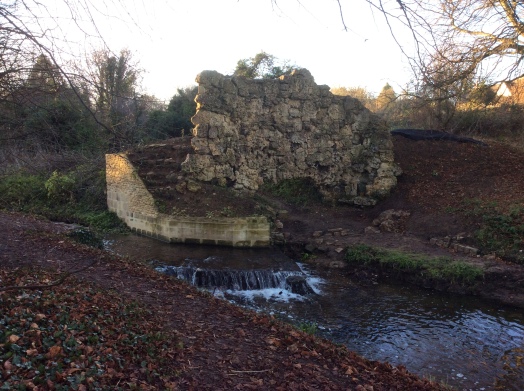 Walking back to the entrance gate, I stepped into the Fox Talbot museum, which was opened in 1975 in the barn, used as stables in the 16th century. The ground floor gallery showcases the history of photography, while the first floor displays temporary photography exhibitions. 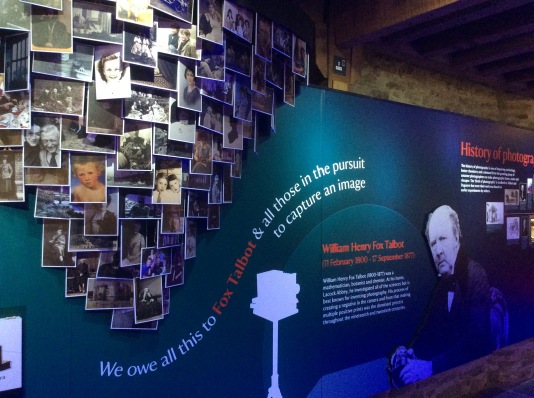 Henry Talbot became interested in photography when he became frustrated with his artistic efforts to capture the scenes he and his wife saw on their honeymoon travel across Europe in 1833. Returning to Lacock, he started thinking about how the image reflected onto ground glass from a camera lucida could be permanently captured, without having to trace its outlines. His chemistry experiments led him to develop light sensitive papers which could be used to leave contact prints of opaque objects, which he called sciagraphs. It was in 1835 that his experiments of using sensitive coated paper and a modified camera obscura led to the development of the world’s first negative. However, he did not publish his results and in 1839, Louis Daguerre announced his independent findings and came to be known as the father of photography. 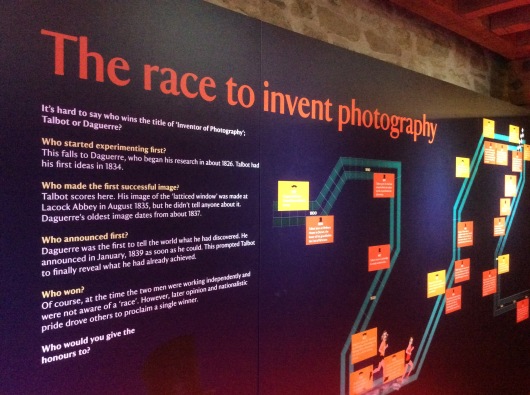 While I had heard of a daguerrotype, which was the first commercially successful photographic process, I had not heard of the calotype, Talbot’s invention and modification of his earlier work in 1835, and which he had patented in 1841. So, it was with interest that I explored the Fox Talbot museum in Lacock.

The Lacock Abbey has certainly had a very interesting history from its medieval beginning as an abbey for nuns and then as a site for early photography experiments.

What features of Lacock Abbey is of most interest to you?

[Linking this post to Wanderful Wednesday and Faraway Files #18]

26 thoughts on “Lacock Abbey and grounds”