My mother and I left Delhi after breakfast. We passed by roads waking up to a fresh day. Barbers shaving heads of clients on chairs set up under trees, street food sellers cooking up breakfast on their mobile carts, locals eating by the cart before rushing off to attend to their day’s work.

At my request, the tour operator had agreed to make a detour on the way to Agra so that we could visit Mathura and Vrindavan. Both places are revered among Hindus as the place of birth of Lord Krishna and the place where he grew up. Passing Radhapuram, we came across lots of cows lazily sitting along the sides of the road. My mother was highly pleased as Krishna was said to have grown among cow herders, according to myth.

We were approaching Vrindavan when Dev, our driver, warned us to keep our doors locked. The road was blocked and we saw a small tax booth. Dev lowered his window to pay the toll fee. Immediately, people swarmed the window and started offering us their services as guide around Vrindavan. Dev responded saying that we did not understand Hindi but they switched to broken English. It was frightening, especially, when some of the more aggressive ones tried to open the doors of the car on both sides. They refused to open the gates without taking one of their guides with us. Finally, Dev shouted back at them and asked whether they were going to accept the toll fee or not and one of them accepted the money and returned a ticket and another opened the gate for us to pass. As we passed through, we saw that one of the local guides was following us on his motorbike.

Vrindavan was awash with temples for Lord Krishna and almost every place was called Krishna something and local residents seemed to depend on Krishna tourism for their living. Before stopping at a temple, which Dev referred to as the main Krishna temple, we discussed a strategy to avoid the hordes of aggressive guides and vendors swarming the place. We would be dropped right at the entrance so that we could go directly into the temple and we agreed we would be at the entrance in exactly fifteen minutes so that Dev could pick us up at the entrance again. 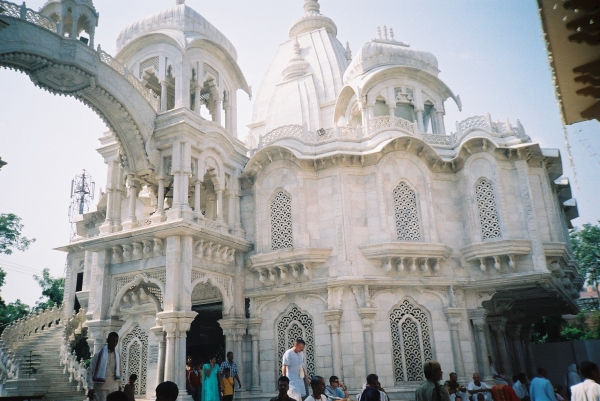 The ISKCON temple was a lovely place but rather crowded that day since there was a special puja – the Govardhan puja for Krishna taking place. We queued to go in to the temple shrine area and passed a courtyard, where a section had been cordoned off and offerings of sweets shaped in lovely designs adorned the middle. We saw kids hanging around the edges of the cordoned off area, looking longingly at the sweets, which would probably be given them at the end of the puja as prasadham.

We could not stand long in one place as there was a massive crowd making their way in and the area where people could sit was already packed so we had to keep moving with the queue and leave the puja area. We saw our driver waiting for us and quickly got into the car. At the gates which led out of Vrindavan, we were again stopped by the local guide on the motorbike, who demanded our driver to give him his name and mobile number. Our driver confidently gave his name and number, to our surprise. The local was satisfied and let us pass through. We asked Dev why he had done that and wouldn’t he be troubled thereafter by that particular guide. He smiled and replied, ‘Correct name, wrong number. He is happy, so no harm.’

Next, we went to Mathura city, to the place where Krishna was said to have been born. An ancient temple, Sri Krishna Janmabhoomi temple, is said to have been built over the prison cell where Krishna was born. However, the temple was subsequently destroyed and rebuilt several times. We were disappointed when we saw the long queue snaking its way around the temple. There must have been over thousand in the queue. We decided we did not want to stand in the queue in the blistering heat and instead would drive around the temple before continuing to Agra.

While we did not visit the oldest Krishna temple in Vrindavan nor the temple at the supposed place of Krishna’s birth in Mathura, my mother was still happy that we visited the area of so many Hindu religious stories as well as folklore. Even though the toll booth harassment at Vrindavan was not pleasant and somewhat scary.

Have you had experiences of being harassed when visiting a famous tourist or pilgrimage site?

To be continued in Agra…