Located in Monaragala district, the second largest district in the country with the highest level of poverty, is a famous and popular pilgrimage site of Sri Lanka. Kathirgamam in Tamil and Kataragama in Sinhala, the unique place is  a site where people from several religious faiths converge. The annual festival in July is a particularly interesting time to visit.

My first visit to Kathirgamam was during the festival time and the place was packed. Our group had to park several blocks away and walk quite some distance through colourfully lit roads lined with street vendors. There was a carnival atmosphere. ‘Kavadi’ dance and music filled the paths leading to the temple where some pilgrims even went to extremes of fire-walking or piercing their cheeks or backs as a penance or for making or having a special request fulfilled. As we came closer, the crowds increased and there were long queues going across the narrow bridge leading to the temple complex. Most pilgrims chose to wade through the river beneath, taking a dip before they entered the temple premises. While my memories of the visit that night during the festival seems to be filled with lots of colour and noise, I have much more clear memories of Kathirgamam during later visits at less crowded times on non-festival days.

Driving in from Tissamaharama in Hambantota district on the south coast of Sri Lanka, we passed lush green fields and beautiful ponds of water lilies. 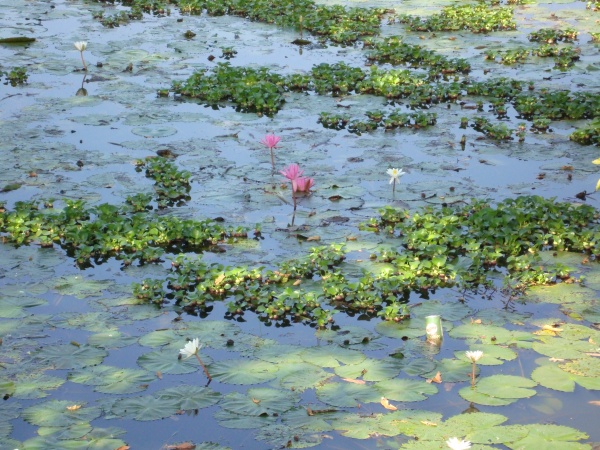 Crossing over to Kataragama, one comes across a bridge built over Manik Ganga river, where during the day you can actually buy some fish food from the fish food seller nearby and feed the fish or you could choose to have a dip in the water as the pilgrims do.

Crossing the bridge on foot, one comes across a compound with assorted modest structures from a mosque to a Hindu ‘koyil’ and a Buddhist ‘pansala’. Despite its modest appearance, the place is steeped in history and legends and is mentioned in 15th century Tamil devotional poems as well as the 16th century Pali chronicle ‘Jinakamali’.

According to the Muslim faith, they associate the site with Hazarat Khizr and believe that the current name comes from the older version Khizr-gama. Hazarat Khizr or the Green One is supposed to have drunk the water of life and gained immortality and eternal youth. Some believe that the secret spring is in this region and come in search of it. An old prayer house is reputed to be the spiritual station of al-Khizr. The main temple complex has a mosque and a Sufi shrine at the entrance where the flag is first raised during the festival season each year.

Kathirgamam is one of the most important pilgrimage sites in Sri Lanka for Hindus and many make special pilgrimages to visit the temple at least once in their lives. Hindus believe that Kathirgamam symbolizes the protection, wisdom and youth of Kathirgamar or Skanda (the many names of Lord Murugan). Right beside the mosque is a temple for God Shiva and along the path to the main temple for Murugan are other Hindu shrines and temples. The annual festival starts on the new moon day in ‘Adi’ (Tamil month of July) and ends with the ‘theertham’ (a special devotional offering involving water) on the full moon day. The casket with the mystic diagram which is preserved in the inner shrine of the Murugan temple is taken out during the festival season by pulling back the seven veils that hang before it in the temple representing the obstacles that one has to pass through to reach the truth. The casket is taken on an elephant to the Valli Amman temple and, after prayers are held there, brought back to its abode at the main temple.

There is a special practice that some pilgrims take. This is the ‘pada yatra(i)’ or foot pilgrimage, which starts a couple of months before the annual festival in July. The longest route is the one from the north which makes its way to the east coast of Sri Lanka and down to the south east. This foot pilgrimage, according to the indigenous Veddah community of Sri Lanka, is a reenactment of the path that the “wise” person who shared knowledge and teachings took before establishing himself in Kataragama which they consider to be a very special place. Currently, the pilgrimage is undertaken by anyone who is interested in doing so, irrespective of their ethnicity. I used to see long lines of pilgrims setting off barefoot, dressed in yellow and carrying cloth shoulder bags, when I worked in Batticaloa on the east coast of Sri Lanka. I was surprised to hear that they walk all the way to Kathirgamam, a journey that took them a month or two to complete and which they timed so as to arrive at the temple complex in time for the festival.

God Skanda/ Murugan is also considered a Buddhist deity in Sri Lanka and is referred to in the Maha Samaya Sutta as the Sanat Kumara or the perpetual youth. Beyond the main shrine for God Skanda is a Buddhist shrine and a Bo tree.

There are a few other pilgrimage sites around Kataragama, which the devout might be interested in visiting such as Kathiramalai or Vadihitikanda, a hill around 5 kms away from the main temple complex, which both Buddhists and Hindus believe is the original site of the temple. However, the climb is quite difficult and not adviced for people with mobility issues. Another pilgrimage place in the vicinity is Sella Kathirgama(m) which is also associated with God Skanda.

What I find most intriguing is that the site is a place where three religions converge and essentially merge in their belief that Kathirgamam/ Kataragama/ Khizrgama is the abode of the one with eternal youth and wisdom. Called by different names, the belief transcends barriers and enables the believers to merge spiritually and the annual theertham/Esala Perahera/festival merges the rituals of all three.

Have you experienced the festival at Kataragama? Do visit Kataragama/ Kathirgamam during your travels around Sri Lanka!

*Wanderful Wednesday, hosted by Snow in Tromso, Lauren on Location, The Sunny Side of Thisand What a Wonderful World
**Monday Escapes #39, hosted by My Travel Monkey and Packing My Suitcase
***The Weekly Postcard, hosted by Travel Notes & Beyond, A Hole in My Shoe, As We Saw It, Eff it, I’m On Holiday, Selim Family Raasta]

18 thoughts on “PLACE OF CONVERGENCE”