I have never really considered a physical place a home. Perhaps that is because we have always moved every few years since I was born. Perhaps it is because I realized very early on in life that for me, my home is where my mother lives, so no matter where I was whether in Sri Lanka or abroad, when I missed home, it meant I was missing my mother. Perhaps it is also because my mother nurtured a sense of home wherever we moved by encouraging immersion in the local language, cuisine and exploration of local neighbourhoods – a feeling that wherever I happened to be, that country was a temporary home to us.

My memories of my birthplace are fleeting memories of brief visits in my childhood to my maternal grandmother’s home in Jaffna, Sri Lanka. The most time I have spent on the Jaffna peninsula was the two years I studied at another town in the district, when I was 10 years old.

So when I received the opportunity of traveling to the north on an internship assignment in 2004, I was delighted to be visiting as a grownup. It was made more of a special experience when my British friend, who had been working in Jaffna for a few years, offered to drive me around the peninsula the Sunday I arrived there. The uniqueness of having my birthplace shown me by a non-Sri Lankan was not lost on me.

Fergus took me first to Vaddukoddai, as I had been remembering the place fondly. We visited Jaffna College that had been founded by American missionaries in the early 19th century. When I studied there, it was the only school in Jaffna that also offered the option of taking O/L and A/L in English medium according to the G.C.E (London) syllabus. This was the reason why we enrolled at the school, when we moved back to Jaffna as my siblings were at a stage where they could not convert to Tamil medium. I was the only one who had to convert to Tamil medium for those two years. However, while I struggled at my studies and my grades dropped, I am grateful in hindsight because it is those two years studying in Tamil medium, that enabled me to gain some fluency in my mother tongue.

View of the courtyard from my former classroom

While this school represented my academic low of the six schools I went to growing up, it also represented a time when I focused my energy on non-academic areas such as girl guiding, elocutions, drama and even music. My favourite spot in the school was the Daniel Poor library, named after the founder of the first English school in Jaffna and a former principal of Jaffna College. I used to be frustrated that there were demarcated zones in the library and that the zone for my class contained English reading material at a much lower level than I was used to reading. I enlisted the help of my sisters who had access to the whole library as they were seniors and the librarian agreed that I could read in the senior’s space during holidays. I would read happily at the library in the mornings, while my sisters would have prep classes for their upcoming exams, and one of my sisters would come in at lunch time to check out a couple of books, that I had chosen for me, on their library card and we would go home.

Jaffna College – the senior section where my sisters studied

When I revisited the school in 2004, it seemed much smaller than how I remembered it to be but it seemed to have been well-maintained over the years.

Fergus wanted to show me two of his favourite places in Jaffna, which were close to Vaddukodai so we went next to Nilavarai. He stopped the vehicle at the road side and showed me what looked like a dilapidated well, with some men hanging around it and a few occasionally jumping into the well. It was the Nilavarai natural underground water well, which is considered the ‘bottomless’ well as the water supposedly does not get depleted.

Several places in Sri Lanka are linked to stories in the epic Ramayana and this spot is linked to the place Hanuman shot his arrow into the ground for water to quench Rama’s thirst. The well has two tunnels, which some believe connects to Keerimalai ponds which are by the coast. Whatever it’s true story, the well apparently has been drawing hordes of people to visit the well. When I mentioned the well to my mother, she said she had visited the place on a school trip during her childhood. 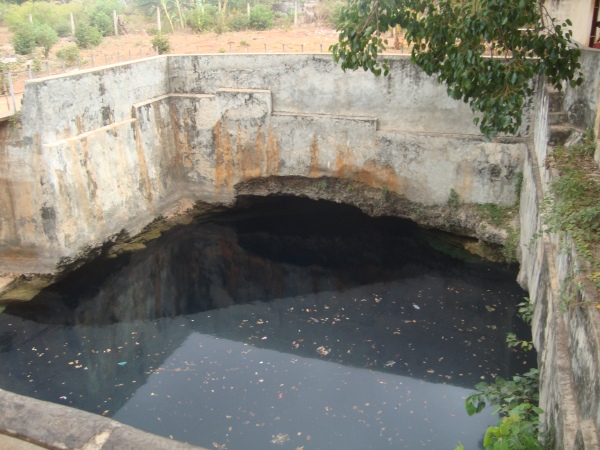 We next visited Kantharodai, an archaeological site in Chunnakam town, which had been located near an ancient port city. Excavations at the site have yielded Tamil Brahmi scripts from 300 BCE, Roman coins, early Pandyan and Chera dynasty coins and other interesting findings. A group of dagobas at the site is that of an ancient monastery for Buddhist monks. The site does not have much information on it and I hope this is something that the archaeological department works on. Nevertheless, it was beautiful coming across the ruins amidst the palm trees.

I had also wanted to visit my grandmother so we drove over to Point Pedro and visited my grandmother and an aunt. While my parents had made brief visits to see their mothers, I had not visited Jaffna since leaving it last in 1990 due to the war in the region. So I found it difficult to find the exact turn off points and had to phone my mother often to check on the route. However, it was a special feeling when I recognized a landmark from my brief childhood visits, such as the hospital where my siblings and I were born, the main road that led to my grandmother’s place, the little temple near her home where we used to go when visiting her. I felt a deep sense of connection despite never having lived there.

We ended the day at Point Pedro beach, which according to Fergus was the best in Jaffna and his favourite. It also happens to be my mother’s favourite as her school, Methodist girls high school, is located on the beach.

Since that travel around Jaffna with Fergus in 2004, I have been to Jaffna several times on work and personal visits and have explored the district more. However, it is this first visit, where I actually traveled around Jaffna seeing the place, that remains etched in my memory as a poignant experience. I am keenly aware of the pleasant irony of the situation – there I was, someone who was born in Jaffna but was seeing my birthplace as a stranger would and I was being shown around the district by a resident of Jaffna, who was not Sri Lankan but who was fluent in Tamil and knew not only its special sites but also had friends among the local communities. What was even more special was that even though it never was and never will be a home to me, I felt a deep sense of connection to my birthplace, the place where my grandmother and my parents grew up.

[I am linking this post to
*#TravelLinkUp, hosted by Adventures of a London Kiwi, Two Feet One World, Silverspoon and Follow your Sunshine whose theme for July is home
**Monday Escapes #40, hosted by Packing My Suitcase and My Travel Monkey
***Wanderful Wednesday, hosted by Snow in Tromso, Lauren on Location, The Sunny Side of This and What a Wonderful World]

16 thoughts on “A sense of connection with my birthplace”